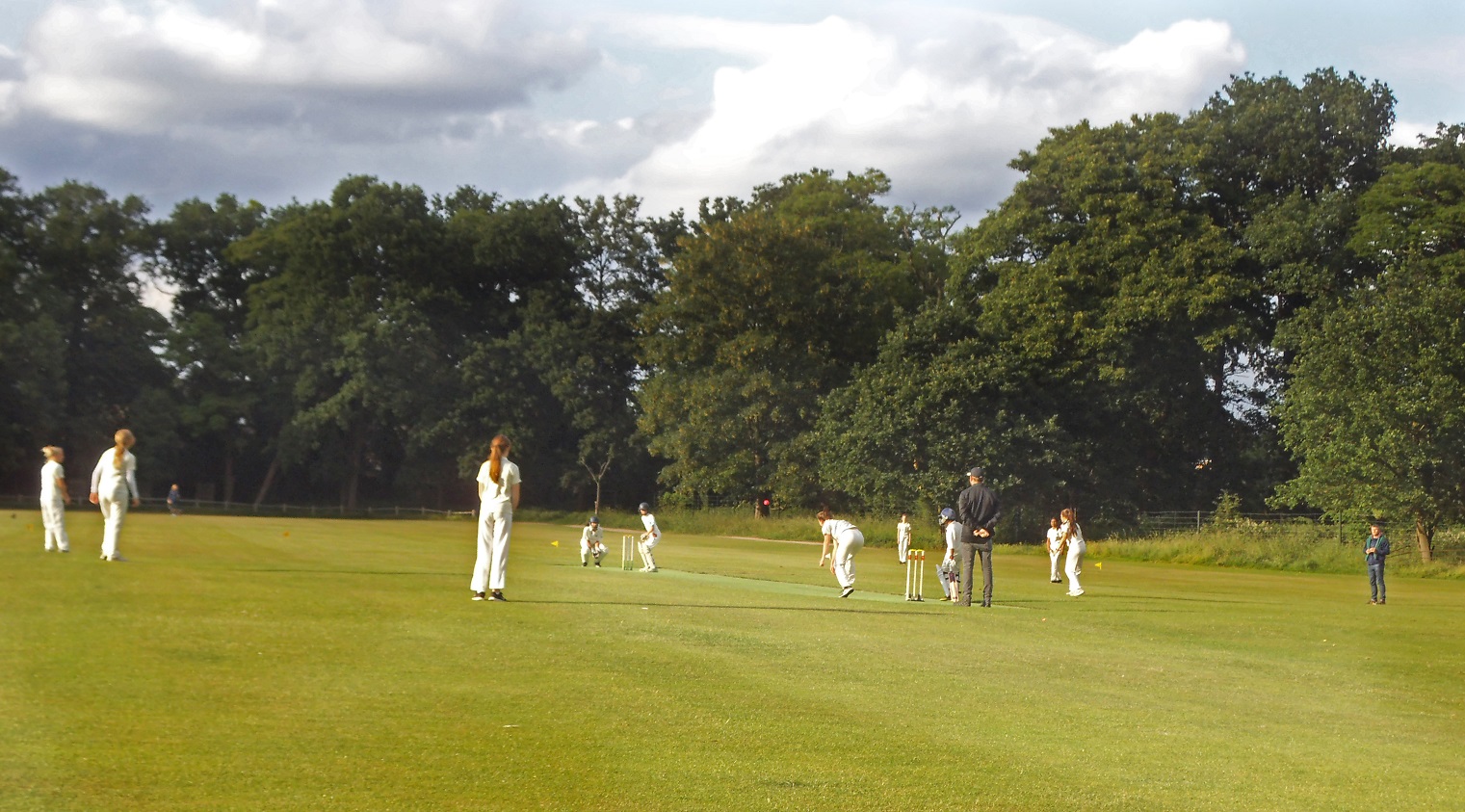 As Bushy Park Girls entered the second half of their MCA South Boy’s League campaign they had already amassed one win, one loss, one abandonment and one tie. Last night (12/06/2018) they faced a Chiswick & Whitton Boys side who were depleted in number but strong in spirit. Bushy Park Girls won with a dominant team performance, capturing a togetherness that will sustain them in the weeks and months to come.

Bushy Park Girls won the toss and put Chiswick and Whitton CC into bat. It was a steady start for Whitton under close examination from opening bowlers Simrat Khaira and Erin Goodwin. Khaira (4overs/1maiden/13runs) relished the responsibility, with a maiden in her second over BPG Captain Abigail Avery kept her bowling until she had exhausted her 4 maximum overs. Erin Goodwin (2o/13r/1wicket) took a little time to settle but soon dished up the first wicket of match, clean bowling Whitton’s opening batsmen. First change bowlers Edie Proud (2o/17r) and Iris Saunders kept up the pressure on their opponents, Proud’s first over yielding only 3 runs. As Whitton reached the 9th over they looked comfortable at 48 for 1, on course for a good total.

Molly Bartlett (2o/1m/7r/2w) accompanied Saunders (2o/5r/1w) in attack and immediately they struck at the heart of the Whitton middle order. Bartlett’s first ball lifted the umpire’s finger with a LBW shout. Her third ball induced a big hit that Imogen Higgins caught well at Mid-Off. Not to be outdone Saunders took a smart caught and bowled chance and Whitton were teetering at 49 for 4 in the 11th over. It has been a stuttering start to the season for Ruby Wilkinson, but here she really got in her stride. The stylish Wilkinson was on good form, her first over induced an edge which was ably taken by Kerrie-Ann Dcunha behind the stumps. It was a near exemplary performance from the BPG keeper, a joy to behold for the purists. Wilkinson (2o/1m/3r/2w) wasn’t done there and took a second wicket with her final ball. Welcome back Ruby.

With Whitton on 61 for 6 in 15 overs there was still time for a fightback but Imogen Higgins, Jess Low and Paige Goodwin had other things on their mind. This terrifying triumvirate outmuscled the Whitton tail in a destructive display of death-bowling. Higgins (2o/4r/1w) got a well deserved wicket when Simrat Khaira snaffled a good catch, while Paige Goodwin (1o/4r) cramped the batsmen with her speed and purpose. Low (2o/1m/1r/2w) was a Titan of destruction, blowing away the final two batsmen with her slinging thunderbolts, the bails on both occasion being catapulted into the air as the stumps were demolished. Whitton finished their innings on 68 for 9 in the 19th over.

Molly Bartlett is in somewhat of a purple patch, and her recent maiden 50 has propelled her to the top of the Bushy Park Girls’ rankings, once again she was imperious. Carrying her bat through the BPG innings and finishing just four shy of another half-century. She opened alongside a new partner Iris Saunders who wasn’t going to play second fiddle to Bartlett’s classy strokes. Saunders hit a belligerent 17 before being bowled in the 6th over. This sparked a collapse in the BPG ranks. Credit should go to Chiswick & Whitton’s young firecracker Ellis Madle, whose first ball accounted for Saunders. His second saw off Edie Proud and third Paige Goodwin. An excellent hat-trick, all clean bowled.

Bartlett dug in with new batswoman Ruby Wilkinson and together they steadied the ship. With Whitton being 2 men down the Bushy Park Girls exploited the gaps in the field. Wilkinson scoring a fighting 4 not out and Bartlett finishing on 46 not out. She has now reached a total of 180 runs this season, and her batting average is currently 45. Whitton’s bowling was strong but Bushy Park Girls reached their total of 70 for 3 in the 10th over.

It was real team performance and the girls were in boisterous spirits, clearly enjoying playing together. A special mention to BPG captain Abigail Avery who bowled all the other girls in the side yet didn’t bowl herself. She didn’t even take up the bat in anger, offering the opportunity to other girls. A selfless act of a fine captain.

Well done to all the girls, and thank you to Chiswick and Whitton boys for an entertaining and hard fought game. Thank you to Ted and Anthony for umpiring, to Deepa and Alban for scoring. Also to Dawn for managing and Billy for the girls’ warm up.

Check out the BPG Stats HERE.