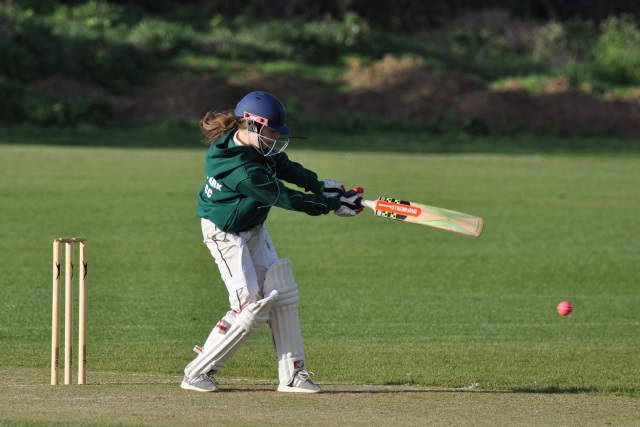 It was a grey and lacklustre evening when BPG U13s travelled to old foes Ealing yesterday in their first league match of the season. With the team two players short of a full line-up and others still battling through the rush-hour traffic, young captain Erin Goodwin won the toss and elected to bat. She chose herself and trusty fellow teammate Imogen Higgins to face Ealing’s formidable opening bowlers.

The pair provided a solid partnership for the first ten overs before Erin was bowled in the 11th over on 26 runs, only one boundary (of which she’d had a few) away from retirement. Sofia stepped into Erin’s shoes, but unfortunately fell quickly due to Ealing’s pace, before seasoned and reliable player Evie Mayhew (7 runs) came in and steadied the ship once more. When her wicket fell to a tasty ball, it was up to U11 youngster Rosie Davis to finish out the innings, having sacrificed her own age group’s match to boost the U13’s dwindling numbers. Rosie showed intent by hitting a boundary on her first ball and was not out on 8 runs at the end of the overs. Meanwhile, Imogen carried her bat for the first time this season with 25 runs in a controlled and steady innings. BPG had set a respectable, but not daunting 91-run target.

With a confident Ealing taking to the field, BPG needed to start as they meant to go on – and they did. Imogen was handed the ball and clean-bowled Ealing’s opener in the first over. Erin then stepped up for the second over and clean-bowled the second Ealing opener. In the third over, Imogen was on attack again and took another wicket, while in the fourth over Erin bowled a maiden. The opening bowlers then stepped aside and Ruby Oakley came in (2o/7r/0w) to bowl two tight overs, with Rosie (2o/8r/0w) seeing her bowling pay off with two run-outs during one of her overs (one a direct hit on the wicket from the sure arm of Sofia Stapleton-Parslow).

However, with only four overs to go and 6 wickets down, Ealing were starting to look comfortable and on track for a win, so a change of bowlers meant that Erin and Imogen stepped into the attack again. Imogen bowled a tight over to relinquish only 5 runs, then Erin let only two runs go in her next over and managed a wicket on the last ball of that over. Imogen (4o/17r/3w) then took another wicket on the first ball of the next over.

The tension was building; the spectators were sitting up a little straighter. The last over would prove crucial.

Captain Erin (3.3o/5r/1m/4w) took hold of the ball, knowing there were two wickets left to fall. Her first ball took the first scalp; her second ball went for one run; her third ball took the last wicket of the game. Cue mass excitement and hysteria in the BPG camp – they’d done it!

Although on paper this looked to be a David and Goliath encounter with an inexperienced and depleted BPG team, the girls certainly rose to the challenge and there were standout performances across the board. Special mention to our wicket keeper, Beth Crabtree, who was outstanding and played a key role in the many run-outs, and Amy Banner, who was exceptional in the field. But most importantly, the girls showed tenacity and enthusiasm and looked to be having an enormous amount of fun – that’s what is most important.

Thank you to Ted for scoring and managing the girls, Chris for umpiring, the BPG parents for braving the mid-week traffic to get the girls to the match and to Ealing for hosting.