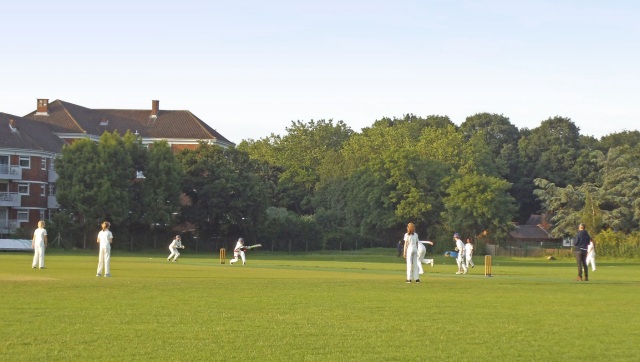 The Battle of the Parks pitted the mighty Richmond against the diminutive Bushy last night at the Newman Cricket Ground (05/06/2018). Richmond Boys B team top the U12 Division 2 table but Bushy Park Girls are no pushovers, fighting tooth and nail to secure a vital win in the league. It was Richmond who powered through in the 19th over to secure the win and take the Royal Park title back to their leafy hunting ground.

Richmond won the toss and put Bushy Park Girls U14 side into bat. Emily Bryce (22) and Erin Goodwin (7) opened the batting. Both played well and put on a very respectable 32 runs in the first 5 overs. Bryce in particular caught the eye with some flourishing strokes, hitting four boundaries in her total of 22 (the highest score in the match). Goodwin (E) fell first LBW and Bryce followed soon after in the 7th over. Captain Abigail Avery gave the crowd a brief glimpse of her brilliance as Richmond fought back. The middle ten overs (from 5 to 15) yielded only 28 runs as the bowlers put the squeeze on. Imogen Higgins (5) and Simrat Khaira faced the brunt of this attack but bravely dug in.

Molly Bartlett (15) likes a little pace to score her trademark elegant cuts and glances, and Richmond were bustling in with purpose. Alongside Lizzie Eakins they took the fight to their opponents, with Eakins scoring a hard hitting 10 in just 5 balls. It was a hostile environment to make a debut but Izzy Morton was completely unfazed. Beside her more experienced partners she scored a bright 9 runs and looked very much part of the team. There was just enough time for a Jess Low dive as she hustled for runs at the end with Kerrie-Ann Dcunha. Together they pushed the Bushy Park Girls total to 91 for 8 in 20 overs.

With some variable bounce from the Newman astro turf wicket Bushy Park Girls still had a chance for victory. Paige Goodwin (3 overs/13 runs) opened with a fine over and immediately put the pressure on the very capable Richmond batsmen. Low (2o/17runs/1wicket) followed up with a wicket from her second ball. A spicy delivery that nicked the glove and was expertly taken my wicketkeeper Dcunha, just centimetres above the ground. Eakins (2o/11r/1w) also got a wicket with her second ball, Higgins taking a running catch at Extra Cover. Not to be outdone Bartlett (2o/15r/1w) got in on the second ball act with an excellent LBW. Despite the loss of  wickets Richmond were cruising to the victory at 50 for 3 in just 7 overs.

Bushy Park Girls fought back, the team coming together, determined to make Richmond scrap for the win. Low ran out their dangerous No.4 batsman with a direct hit from Midwicket, the young man temporary losing his composure in disbelief. Next it was the turn of Emily Bryce (2o/4r) and Izzy Morton (2o/4r), bowling in tandem they produced an accurate and economical spell that started to sow the seeds of doubt in the Richmond batter’s minds. Abigail Avery (3o/1maiden/9r/2w) started her bowling with a maiden and finished with 2 wickets, both clean bowled. Unfortunately the match just ebbed away from Bushy Park Girls. Despite some last ditch efforts from Higgins (2o/13r) and Goodwin (E) (1o/2r) Richmond edged past the BPG total at the end of the 19th over. Congratulations to Richmond Boys on a good win, particularly the bowling which is the best we’ve seen in the league.

Thank you to Ian and Ted for umpiring, to Lara and Alban for scoring and for the help from parents (and brothers) in warming up the girls.