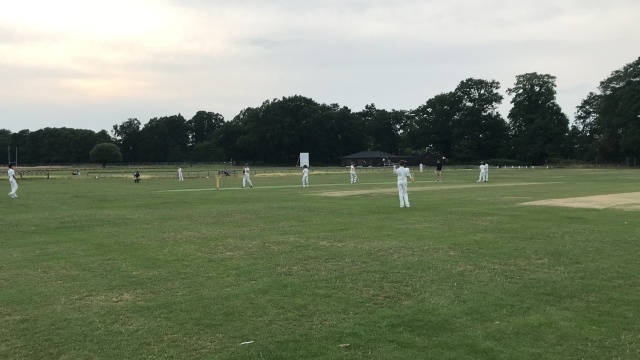 It was another gloriously sunny evening as the BPG U15 team took to the pitch for their final fixture in the U13B league. The last time the girls faced Hampton Wick, extras were the winner (see previous match reports), but the boys looked to have made a few personnel changes since then and the new-look team meant business.

With captain Paige Goodwin losing the toss, the girls were sent into the field, but rumour has it that would’ve been the decision anyway. There’s nothing more exciting than a run chase, as anyone who watched yesterday’s thrilling World Cup final knows, and the girls were keen to limit the batsmen from the start.

Levels of excitement among the spectators were high too when it was discovered that the clubhouse was serving Pimms on tap. Your scorer may have had a few herself, so some of the details of the match may be a little fuzzy from this point on.

Paige called on younger sibling Erin Goodwin (3 overs/12 runs) to bowl the first over alongside Emily Bryce (3 overs/11 runs/1 wicket) and between the two of them, there was little on the scoreboard after the first two overs. Emily saw an early break when her bowling resulted in the no 2 batsman barrelling the ball into the safe hands of expert fielder Jess Low in her first over, followed shortly afterwards by a run-out of the no 3 batsman, again at the hands of fielding supremo JLow. However, their opener stayed where he was and would prove tricky to shift.

The second bowling change fell to Molly Bartlett (2 overs/6 runs) and Paige (2 overs/10 runs). Although usually seen squatting behind the stumps as wicketkeeper, Molly B proved quite a force with the ball too. Both girls kept things tight and the run total under control.

And still the opener remained….

Abi Avery (2 overs/19 runs) and Simrat Khaira (2 overs/5 runs) both unleashed the ball at him, but to no avail. Amy Coppin was unlucky to be tagged a few times in her over before reliable bowlers Imogen Higgins (3 overs/28 runs/1 wicket) and Rosie Davis (2 overs/7 runs) were called on to have a go. Finally, with the overs counting down and the opener still in situ, Erin and Imogen were called upon again, with Higgins finally getting the opener out caught and bowled, but not before he had accumulated a total of 73 runs.

With a target of 120 runs to chase, JLow and Kerrie-Ann D’Cunha were sent in to make an early dent in the total. However, with Hampton Wick choosing to put their faith in the opening batsman when it came to opening the bowling too, both Kerrie-Ann and JLow were sent back to the clubhouse early into the innings. If only they were both old enough to drink, then they could’ve ordered a Pimms and sat back with the rest of us to enjoy the remainder of the match.

Bryce and Coppin were next to the crease. Brycie managed to accumulate 11 runs off 15 balls, including two impressive boundaries, before being given LBW off the opener’s bowling again. He was proving to be a bit of a thorn in the side. Amy stood her ground and valiantly blocked some of the fast-paced balls, but it was starting to look ike a lack of runs on the board mught be our undoing.

It would fall to Molly to settle things down and start accumulating a few runs. With Imogen at the other end of the crease to Molly, it looked like we would start to get somewhere as both are known as big hitters, but alas it was not to be. A similar fate met Simrat as she fell victim to a miscommunicated runout. This wasn’t looking good from the sidelines.

However, with a batting order almost as deep as that of England, there was no need for the ripple of panic filtering through the spectators. The fall of Simrat’s wicket brought another big hitter in Erin G to the crease and she immediately set to the task at hand. Reminiscent of Stokes and Buttler, Bartlett and Goodwin unleashed a torrent of boundaries, stole more than a few cheeky runs and had the spectators ooh-ing and aah-ing as the runs began to accumulate. Even Hampton Wick bringing back their devilishly fast, one-man-show opening bowler did nothing to slow down the Bartlett and Goodwin double act.

By the 18thover, the total was reached, the game won and the Pimms glasses drained. Molly scored her first half century of the BPG season in superb style and ended the game on 55 not out from 52 balls, while Erin ended on 19 runs not out after only 12 balls.

And so, as the sun set over the pitch, the U15s ended their season on a high. It has been another fabulous season in this league, with many highs and some fantastic cricket on offer. If only there had been less rain! As always, thank you to Duncan for umpiring and the parents for supporting the girls, helping with setting up and dismantling the pitch, and delivering Pimms to the scorers.

For many of the girls, this will have been their last league game as an U15, but with Bushy Park Women now up and running, this is not the last we have seen of them. It has been a very entertaining season and well done to each and every one of the girls. You’ve done yourselves proud as always and in true BPG spirit.

If only the cricket season was longer (and the Pimms glasses deeper)…..