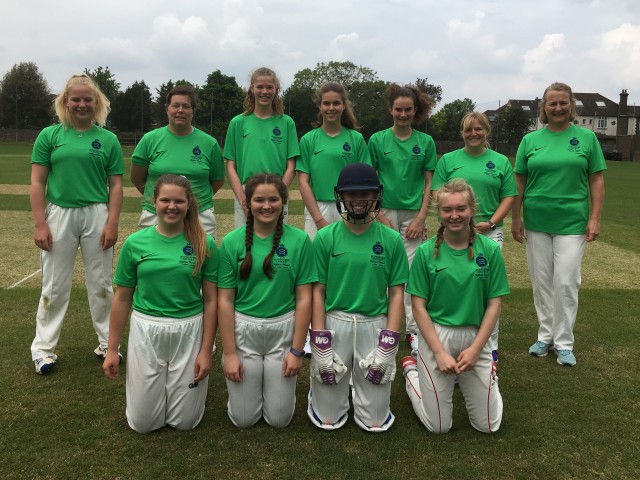 Sunday 19th May was a historic day for Bushy Park Girls CC. It was the first time we fielded a Women’s team as we embarked on a new adventure with a game in the Middlesex 20/20 League against Actonians Ladies.

Mind you it almost didn’t happen for late on Saturday we only had 8 players and had just found out that we had to play in coloured kit! Fortunately, Middlesex had kit for us and it was duly retrieved from Finchley. Then Julie Fielder the Middlesex U13 Manager kindly offered to play for us and Dawn was still thinking about it! Saturday closed with 9 (or maybe 10) players ready to make their debut.

Sunday afternoon proved a little muggy with the threat of storms in the air and a little rain falling on arrival at Actonians ground. The team arrived in dribs and drabs through the mizzle before it was enlightened by a gleam of white. It was Dawn resplendent in Paige’s spare cricket whites! We had 10! Hang on. It’s 11. Linda deciding to forsake her scoring duty and slipping on Lauren’s spare whites. A full team to make our debut. With Dawn, Linda and Julie our team’s average age must have risen from 14 to at least 17 😊!

After a short warm up Lauren lost the toss and Actonians chose to bat. Nobody wanted to keep wicket so Lauren took the gloves and Eve Abbott had the honour of bowling the first over for Bushy Park and Alex Barton the Actonians opener showed her intentions by fiercely pulling a ball to the leg side boundary. Another followed in the next over bowled by Paige but then Eve speared a ball through the other openers defences to take Bushy Park’s Women’s first ever wicket. 18-1.

Erin replaced Eve for the 5th over and took a wicket with her 1st ball winning an LBW appeal against Actonian’s number 3 bat. 28-2. At the other end Emily came on and she to claimed a wicket in her first over bowling the number 4. 31-3.

Both Erin and Emily did a good job at restricting the runs although Alex Barton continued to punish anything lose and must have scored about 90% of the team runs at one point. The run rate increased. Evie Mayhew bowled a first over where there were a couple of mis-fields that damaged her bowling figures but she came back to bowl a miserly 2nd over conceding just one run. At the other end Maddie bowled two excellent overs to keep things tight.

Abi came onto bowl and was somewhat frustrated that their number 5 bat kept turning balls off her middle stump round the corner for runs. However, in the 16th over she took the prize wicket of Alex Barton, who departed for a magnificent 70 out of 97 scored, after a very well judge catch by Maddie. Only 12 other runs had been scored off the bat whilst she was in. 97-4

Eve came back to bowl the only maiden of the innings and then our youngest player Erin sprang to life and threw the ball in to run out their number 5. Paige and Eve completed the death bowling so that Actonians finished on 120. An excellent bowling and fielding effort from the team well manipulated by Julie helping Lauren.

Highlights in the field included Linda’s Ronaldo like stepover and Dawn waiting and looking forward to fielding a ball that was coming to her only for Eve to swoop in front and pick it up.

Lauren went to debate her batting order (I am guessing there was the usual lack of volunteers for opening!) while the crowd pondered on whether 121 was a gettable target.

Onto the field stepped Paige and Abi. Your reporter was a little concerned on the pairs ability to stay calm under pressure given the previous days ‘spider’ incident (you can ask them!) but they showed little sign of nerves as they started off positively running quickly between the wickets as if there were a giant tarantula chasing them!

Singles were turned into twos and fours punched hard to the boundary until Bushy Park were getting ahead of the run rate and we were 45-0 off 8 overs. Actonian’s captain Alex seeing the danger bought on herself and the canny Sue Donaldson to tighten things up and it wasn’t long before the latter claimed the wicket of Abi for 34. 55-1 off 10 overs.

Emily came to the crease and looked to up the tempo but in her next over Donaldson threw up a tempting delivery and Emily looking to dispatch it to the boundary missed. 62-2 off 11.

Evie came in looking to stop the rot but got an unfortunate inside edge the rolled back onto her stumps. 63-3 off 12.

Captain Lauren joined Paige to try and get the inning back on track. A four through the covers for Paige and one over midwicket for Lauren bought some relief but then Lauren trying to drive Donaldson over cover sliced the ball and was caught. 75-4 off 15. 46 were needed off 5 overs.

Julie joined Paige with the instructions to look for quick singles, turns ones into twos and twos into threes (ok I made that bit up!). Nevertheless, the tempo went up with 10 off the next over and Julie out running Paige! The pair continued to keep the scoreboard moving but with nearly all the Actonian’s fielders on the boundary 4s were hard to achieve and ultimately with 18 needed off the last over it proved just too high a mountain to climb. Bushy Park finishing on 109-4. Paige ending with an excellent 35* and Julie 18* off just 14 balls. (and she had to run most of those!)

It was a fantastic achievement from all the girls in Bushy Park’s first women’s match and they can be extremely proud of themselves. I am sure everyone learnt a lot from the experience which will help in the coming games. A big thank you to Alex, Marilyn and the Actonian’s Ladies for making us feel so welcome. To Jack for standing in to score and making a very professional job of it (you can have the job every week!) and a special thank you to Julie, Dawn and Linda for making sure we had 11 players on the pitch for our first game.