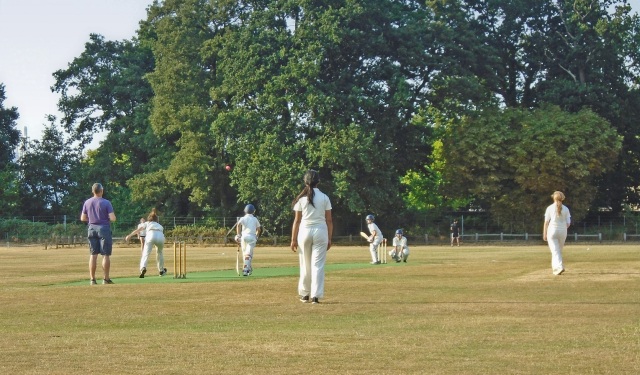 The top two teams in the MCA South U12 Boys League finished their season with an all out Battle Royale at Teddington CC last night (09/07/2018). Richmond had already won the league but Bushy Park Girls weren’t going to be snuffed out without a few fireworks of their own. As another day of high temperatures ebbed away the heat burned strongly in the batting blades of both teams. It was Richmond who ran out worthy winners, largely due to a brilliant century from their No.5 batsmen.

Bushy Park Girls won the toss and chose to field. Jess Low (3overs/2wickets/24runs) and Paige Goodwin (2o/1maiden/16r) opened the bowling knowing that Richmond have been the only team to beat them this year. Both had exceptional second overs, Low striking first, dispatching Richmond’s No.1 and No.3 batsmen in the space of 3 balls. Goodwin (P) cast aside her nerves and bowled a beautiful maiden to back up her partner. Simrat Khaira (2o/8r), Eve Abbott (4o/1m/2w/32r) and Molly Bartlett (2o/10r) kept the pressure on. Khaira is one of the emerging players this season, no U15 cricketer has bowled more overs than her. It was wonderful to see Eve Abbott back in bowling action after a difficult season with injury. She started with a fast and straight maiden over. In Abbott’s second over Imogen Higgins displayed her fielding prowess. A lightning throw from the boundary hitting the wicket with a direct hit. By the end of the 9th over Richmond were 69 for 3.

Richmond came out fighting like the league champions they are. Bushy Park Girls fought hard in the remaining overs but there was little they could do to contain Richmond’s Thomas Tabor at No.5. He hit six Sixes and twelves Fours in his innings of 106*. The girls had never come up against a batsmen of his calibre or confidence before yet they kept plugging away. Edie Proud (1o/24r), Imogen Higgins (2o/23r), Emily Bryce (2o/24r) and Erin Goodwin (2o/25r) all threw themselves into the breach, and they can all hold their heads high. Abbott came on for a second spell, momentarily halting the progress of Richmond by bowling two batters in her third over. Yet nothing could halt the Richmond juggernaut and they reached 203 for 5 in 20 overs. As always a special mention to wicketkeeper D’Cunha who kept brilliantly with a cool head under intense pressure. 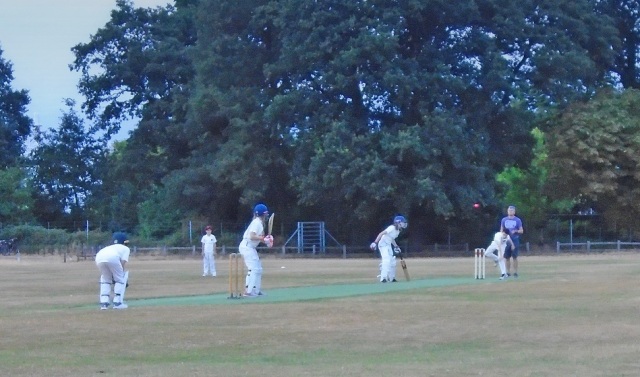 With such a daunting target to reach Bushy Park Girls would have to attack every ball as they opened their innings. There was no point in bowing out on a whimper, it’s just not the girls’ style. Captain Molly Bartlett opened the batting with Paige Goodwin, and they took the fight to Richmond. Bartlett sweetly carved the first ball to the boundary but the do or die attitude took its toll in the second over. Bartlett was first to go followed by an attacking Goodwin (P). Edie Proud and Jess Low came together and quickly fought back against their opponents. Low’s innings was bristling with aggression and strength. She dispatched two enormous sixes that rocketed into the dying light of the evening sky. Boundaries were coming thick and fast as she put Richmond to the sword. Eventually Low’s innings of 32 runs from 15 balls ended as she picked out the fielder at Square Leg.

Kerrie-Ann D’Cunha and Amy Coppin took up the baton from Proud and Low. Both striking the ball hard and fast to the boundary. D’Cunha hit a sparkling 15 in just two overs at the crease. Simrat Khaira pushed for those extra runs to keep up with the scoring rate but fell valiantly in the 10th over. Bushy Park Girls had to dig in now, and the rearguard action of Imogen Higgins (16) and Erin Goodwin (24) brought some stability. Together they pushed the BPG total beyond the 100 mark, both played well against an accurate and hungry Richmond attack. All the girls were unselfish in their approach, playing for the team and keeping in good cheer as their target stretched out of reach. The handy Emily Bryce came in at the end to flash a quickfire 6* and together with Eve Abbott they reached 126 all out (19.5 overs).

Both Richmond and Bushy Park Girls served up champagne cricket for their supporters. BPG’s total was some distance below their visitors but was still the highest total scored against Richmond in the league this season. Richmond finished top of the league on 70 points, with Bushy Park Girls on 53 points (4 wins, 2 lost, 1 tie).

Congratulations to Richmond and batsmen Thomas Tabor on a fabulous win and the MCA South U12 Division 2 title. 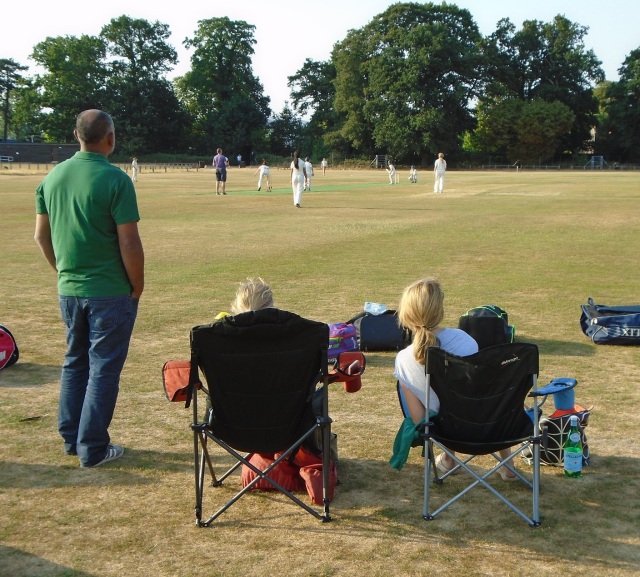 Thank you to Ted and Alok for umpiring, for Ian and Alban for scoring. As always thanks to Dawn for managing the girls and to all the parents for supporting. The girls have been a real credit to the club and to the MCA South league, playing the game in a good spirit and with some fantastic cricket for us to savour.