After winning their semi-final against North Middlesex CC last Sunday (03/09/2017) morning Bushy Park Girls waited while the second semi-final was played out against Ealing CC and North London CC. With the latter being triumphant it was time for the Bushy Park girls to face the excellent North London outfit in the final to see who would be crowned 2017 Middlesex Champions. 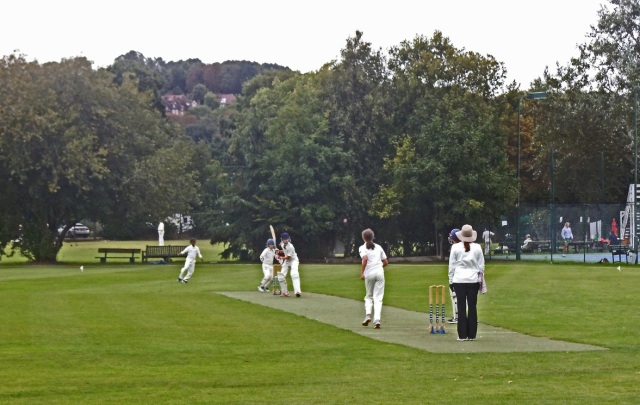 With rain in the air Bushy Park Girls won the toss and chose to bat. It was a good choice as North London CC found three BPG batswomen in a serious mood to make runs. Kerrie-ann D’cunha took control early, lashing out with a series of boundaries, racing away to 15 runs before being caught in the 7th over. Her opening partner Molly Bartlett always seems to bring her best form to the Middlesex Final and this year was no exception. Bartlett constructed a mature innings, carrying her bat and scoring 28 not out, playing some delightful shots to all corners of the ground. After her success in the semi-final Evie Mayhew fell early but Eve Abbott once again took up the baton, carving out an impressive 24 runs, with many a boundary hit straight down the ground, right under the noses of the scorers. With some tight overs from North London’s five chosen bowlers it was an impressive display by both sides. Bushy Park Girls finishing on 104 for 2 in their 20 overs.

With the expected rain falling in light showers Bushy Park Girls fought valiantly as a team to defend their total. Once again the quartet of Jessamy Low (captain), Eve Abbott, Simrat Khaira and Paige Goodwin opened the bowling but the North London batswomen knew the score they needed, and kept up with the required run-rate. Both Abbott (4-1-26-0), who bowled a maiden in her second over and Khaira (2-0-17-0) came under pressure from the batswomen. Although largely untroubled, the youngest North London opener slipped on the wet wicket but Bushy Park Girls chose not to attempt the run out, helping to preserve the elusive ‘spirit of cricket’. BPG didn’t rue their generosity when Molly Bartlett took a smart catch at point off the bowling of Emily Bryce (1-0-3-1) to dismiss the young opener. 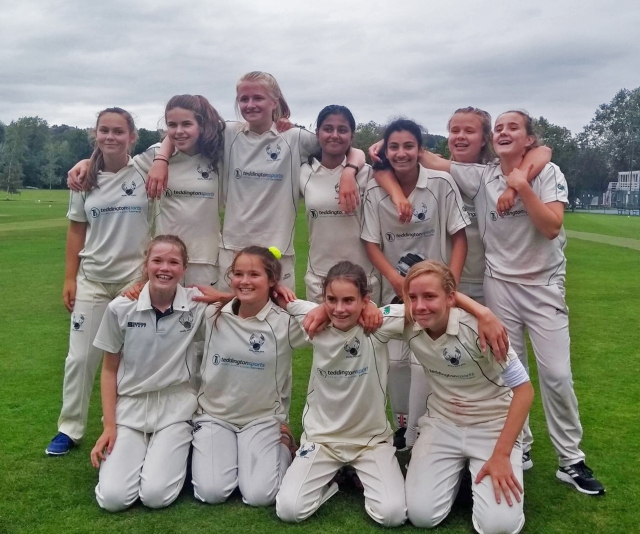 Evie Mayhew (2-0-12-0), Emma Bridge (1-0-5-0) and Edie Davies (1-0-6-0) kept the pressure on North London CC while Edie Proud (1-0-7-0) struck with a wicket again with the final ball of her over. With the score on 97 and just 2 overs left, the game was finely balanced as North London battled to reach their target of 105. The penultimate over from Low (4-0-15-1) yielded a wicket and a run out (Proud) but with 4 needed from the last over it was nail-biting for players and spectators alike. Goodwin kept her nerve in the final over, with a superb display of accurate bowling. With a run out (Bartlett) off Goodwin’s 3rd ball, North London needed 4 runs from 3 balls, then 3 runs from 2 balls and ultimately 2 runs from the final ball.

The tension and romance of the final ball in the 2017 Middlesex Final is a story in itself. After hitting Goodwin’s final ball the two North London batswomen ended up at the same end in their desire to eek out the run they needed for the draw. Bushy Park Girls seizing their chance for the win threw towards the unguarded stumps at the opposite end. The ball missed the stumps and the North London batter scrambled home. The Bushy Park Girls suddenly saw the win disappear and heads were held in hands. Bushy Park Girls were caught off guard assuming the match was a draw but then the batters started running a second audacious run! With the ball in the hands of the BPG fielder she merely needed to run at the stumps and knock off the bails, yet luck wasn’t on her side as she slipped on the wet wicket. She fell, stranded mid-wicket and North London CC secured the win by completing two spritely runs. There was a little confusion at the end but the umpire patiently talked to the losing side, explaining that he hadn’t called the end of the over/match and it was just one of those unfortunate events.

Congratulations to North London CC on a hard fought win, it was a very exciting final and a wonderful advert for the girls game in Middlesex. Thank you to the independent umpires Lizzie and Nisanka, also to scorers Sunir and Alban. Thank you too to everyone at North London CC for such an enjoyable day, and for making us feel so welcome.

Well done to all the Bushy Park Girls who have played for the BPG under 13s this year, it has been a complete team effort, from all the league matches in the West League to the girls that played in the final. We are very proud of you all. Let us not forget Mark Avery who manages the side and has worked tirelessly for all the girls.

Jess Low picked up the West Middlesex League trophy on behalf of the Under 13s (and also for the Under 15s too), while Erin Goodwin lifted the under 11 trophy. It is hard to draw positives when you lose a match under such tight circumstances but without sounding too clichéd, whether we win or lose, Bushy Park Girls Under 13s are a wonderful team to be involved with. It has been a pleasure to spend time with you all.