This was the third meeting this year between Teddington Town CC and Bushy Park Girls CC in the Under 12 MCA West league 3rd Division (22/06/2017). With Teddington Town winning the first match and BPG the second this was to be the match to secure bragging rights for the year ahead. As you’d expect it was an evenly fought contest, that came down to the last over of the match. Bushy Park Girls came away the winners, reaching their target of 114 with 2 balls to spare.

Teddington Town won the toss and chose to bat in the evening sunshine of Bushy Park. It was a welcome return for Jessamy Low (2-0-5-0) who has been injured since the impressive wins vs Spencer CC (11/06/2017). She resumed her little and large partnership with the ‘Pocket Rocket’ Erin Goodwin (2-0-5-1) and once again they set the tone, with only 10 runs conceded in the first 4 overs. Goodwin (E) made the first bowling breakthrough when Emma Sloan pulled off an impressive catch. Imogen Higgins (2-0-9-0) and Simrat Khaira (2-0-15-1) were first change bowlers with Khaira proving that her straight line will always pay dividends. She now has now chalked up an impressive 7 wickets in 2017.

All the girls struggled with the prodigious swing from the warm breeze that cut across the wicket but Paige Goodwin (2-0-22-0) and Eve Abbott (2-1-1-2) battled through. Abbott’s two overs yielded just one run and two wickets, and she is revelling in her strike bowler role. Her first wicket was the result of a fine catch behind the stumps by wicketkeeper Kerrie-Ann D’Cunha. Emma Sloan (3-0-13-0) and Abigail Avery (2-0-12-0) came into the attack when the Teddington Town batsmen were taking risks and moving their total forward with purpose. Lizzie Eakins (2-0-17-2) took her first wickets of the season with a fine first over, bowling the TTCC’s opening batsman and an LBW four balls later. A special mention to Isabel Jenner (1-0-9-0) who bowled in her first Boy’s League match after the match against Hampton Hill CC was rained off. Although the girls worked hard in the field the Teddington Town CC batsmen and team were confident and composed. Teddington Town scored 113 for 5 in their 20 overs, a total that BPG had never chased down before in the Boys League. 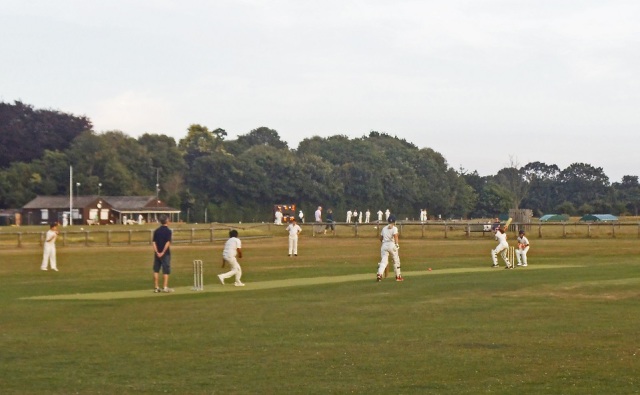 Bushy Park Girls stacked the odds against themselves with two quick wickets in the opening overs of their reply . The Goodwin girls having one of those sisterly moments that we are all prone to with our siblings (Paige 5 runs). They paved the way for Imogen Higgins (43) and Abigail Avery (13) to take to the stage, with an excellent understanding of matchplay they kept up with the run rate until Avery played-on in the 8th over. Jessamy Low (6) accompanied Higgins until the 11th over, with Isabel Jenner also falling within 2 balls. Eve Abbott (6) played another excellent supporting role to the ever present Higgins, but another double wicket whammy saw both Abbott and Higgins back in the pavilion. It was a superb innings by Higgins who achieved her highest score ever in all forms of the game (43), she hasn’t wilted in the current heatwave, in fact she burns even brighter.

The score was perched tantalisingly on 103 for 7 after 18 overs and with 11 runs needed from 12 balls the tension in the crowd along the boundary was palpable. Emma Sloan hit her own wicket while reaching for a wide delivery and Simrat Khaira valiantly sacrificed her wicket with a brave charge than resulted in another run out from Teddington Town’s fine wicketkeeper. With the last wicket pair Kerrie-Ann D’Cunha and Lizzie Eakins at the crease this was a do or die moment. With four runs needed and just three balls to reach the target D’Cunha leaned back and hit a lofted drive straight over mid-on’s head and the ball raced to the boundary. 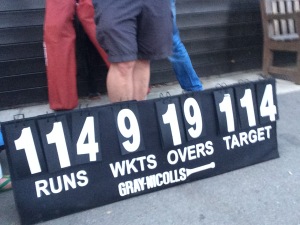 This was a mature performance from a group of girls who are gaining in confidence all the time. We shouldn’t forget that BPG didn’t even win one game last year against Boys League teams. This year Bushy Park Girls have 4 victories to their name. Congratulations to Imogen Higgins who has now scored more than 200+ runs in 2017 and Captain Fantastic Abi Avery who has score more than 300+, a great achievement from both of them. Most of all well done to the whole team (and squad) who are proving to be a formidable cricketing force.

Thank you to Mark and Jools for umpiring, Alban and Simon for scoring. Thanks for a wonderful game Teddington Town CC and good luck in your remaining matches this season.