The sun was shining for the U11s as they took up their bats against hosts Richmond CC last week at Christ’s School. The opening batting pair of Rosie Davis and Jessica Spencer set the pace early on with a fantastic partnership of 18 runs after an unlucky early wicket in the opening over. Claudie Dexter and Grace Tasker then took over the reins and hit a flurry of boundaries to score 17 runs, followed by Maddie Sloan and Lucy Brown (in her debut for BPG), who both batted confidently, and Sofia Stapleton-Parslow and Hope Jones, who were a pleasure to watch. The final pair of captain Ruby Oakley and vice-captain Erin Goodwin scored the highest partnership of 23 runs with a number of boundaries between them to see BPG set a daunting target of 326 for the opposition. 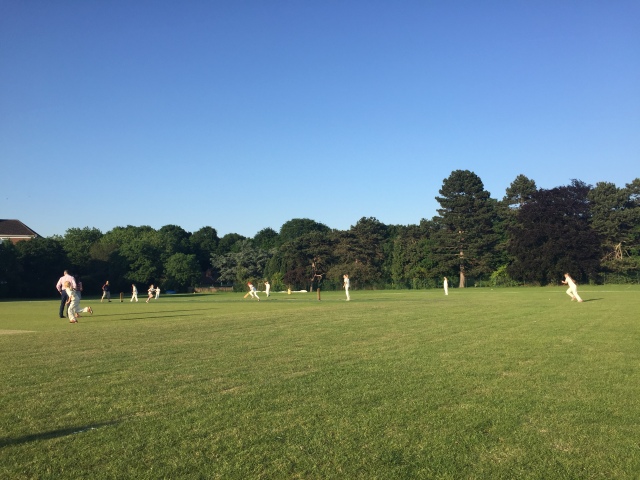 A quick break saw Richmond very kindly providing “half-time oranges” in the form of much-appreciated cold drinks and flapjacks before the girls took to the field once more. The bowling across the board was very tight and disciplined, with all of the team proving very accurate and alert. Wickets came from Maddie, Rosie, Claudie and Hope, with Sofia showing her confidence in the field with a pinpoint throw at the wickets resulting in a spectacular runout.

All in all, BPG secured a 68-run victory, with the entire team proving how much they have improved so far this season – and how much they enjoy playing as a team! It really was lovely to watch in the glorious sunshine.

A special thank you goes to Paige Goodwin (BPG U13) for stepping in at the last minute to umpire the first half of the match before Ted took over (still suited and booted from work) and to Damian for once again scoring for us, as well as to Richmond CC for hosting.