Bushy Park Girls U15 opened the season with a friendly against “NPL Boys Select Under somethings” on Friday night. Despite the forecasts of blizzards the game got under way in glorious sunshine and the BPG’s elected to bowl first in a game limited to 15 overs, which was later extended to 18 given the good light.

The girls decided to open with one of the ringers from the u13’s, Jess, who was very tight and restricted NPL to a quiet start and struck the first blow in her second over, bowling their opener. The rest of the bowlers did well, bowling pretty good lines outside off stump, although the odd wide did become costly in the end with their “extras” scoring well.

BPG had two girls on debut, Bex and Issey who both did well in the field, with Issey taking a terrific catch that was drilled head height to her at mid-off, she never flinched! (They chose the wrong fielder there!)

Cerys showed some good pace, Lucy was measured and accurate, ably backed up by Pubidika who really put her back into it and Lauren swooped around the cover boundary like a hawk! It is also worth mentioning Abbie, another U13 ringer who was given the responsibility of bowling the last over. No “Ben Stokes” for her – she put the breaks on and took 2 wickets in the last over to keep the total within reach.

The highlight from the fielding performance was hard to choose – so I will mention both, the dismissal of their dangerous looking No.3, caught behind by Roxy off a real snorter from Ellie, having just been hit for 4 the previous ball and then a hat trick of stumpings by Roxy who was in excellent form behind the stumps. Those boys need to stop going walk about so much next time around.

Having to chase 89, we set off well, only for Lauren to be caught and bowled – I think she was expecting the bowling to be a bit quicker. Ellie and Mille went well for a while, then the next wicket  brought Stella in and she did some excellent running between the wickets. With 3 down – in came Roxy and her form from behind the wickets continued with the bat, hitting them to all corners of the ground. With the demise of the next wicket – we had our very own Hong Kong import, Issey (on debut) who sadly go one of those straight unplayable balls and was back in the hutch without bothering Alban, the scorer!

With Roxy still at the crease, there was still hope, Pubudika was then given out after a controversial decision, that involved an imaginary “hawkeye”. Never mind, in came Abbie and again there was hope, rotating the strike well, until Roxy had to retire on reaching a very good 20. Bex, another on debut was next in and managed to scamper one off her first ball, only to be very unluckily run out at the non strikers end after Abbie hit the ball straight back at the bowler.

Nerves now set it and it was if we were at the fairground – the next three ducks  were all lined up in a row – but the good news was, that this brought our in form Roxy was back and she put up an excellent fight, hitting the last two balls for 4 and ending the match as the only person to retire and the top scorer with 36 not out. That combined with her catch and 3 stumpings made the Charlotte Edwards Woman of the Match award an easy decision for Nasser in the TMS studio.

Special mention to Bronnie and Rachel for coming along to support, Alban for scoring, Mark for umpiring in the second half as the sun went down, the girls, and of course the boys and their management for stepping in and offering us a fixture at such short notice.

Photos – Score card (we all know who top scored!) and the girls doing what they enjoy – holding court on the sidelines. 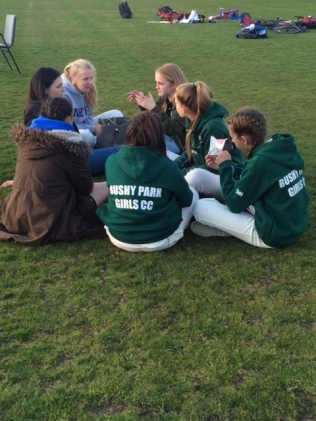