U13 manager Mark Avery shares his Bushy Park Girls experiences in the BPG Inside Story…..

A cold sunny day greeted the 5 girls who gathered at Teddington station early on Sunday morning (Phoebe and Ella decided the warmth and comfort of the car was a better option!). It was the day of the London Youth Games cricket finals and the girls were eager with anticipation for the day ahead. Sadly they had to leave behind their 8th team member Amelie who had been cruelly crocked playing hockey during the week. The remaining 7 promised to do their best to bring her back a medal.

The train journey flew past with no incident apart from Imi realising at Waterloo that she had left her cricket bat on Hampton Wick Station (fortunately recovered by dragging Dad out of bed!). We arrived in plenty of time at the home of cricket, Lords Cricket ground in St Johns Wood, to watch our potential semi-final opponents, Bexley, easily win in their quarter final.

Very quickly the start time for our quarter final against Harrow, containing the much talked about Sonali, arrived. Would she smash us everywhere and then bowl us all out as some feared?

Harrow got off to a good start but the girls pulled it back bowling tightly in the middle overs. The revered Sonali took to the crease quite late and batting well soon reached 20 but then had to retire. BPG kept the pressure on as wickets fell. The last over arrived but Harrow could only manage 3 runs as they lost 3 wickets including the returning Sonali.

102 to win and some of the girls looked worried but they were reminded of how they had chased down a similar total against Hillingdon in the qualifiers. Abi and Ella opened the innings facing the fast paced Sonali. They stood firm taking her for 17 off the first over and continued to batter the bowlers and steal many runs they shouldn’t. They quickly passed 50. Abi retired and then Ella. Jess hit a couple of lusty blows, Phoebe was cruelly run out. But we were always ahead of the rate and Sadie and Imogen saw us home with 2.5 overs still to bowl. A comprehensive victory and at this point Richmond girls’ cricket team had progressed further than ever before in the London Youth Games. Now guaranteed joint 3rd place!

It was a long wait to our semi-final against the fancied Bexley side. Food was eaten, Cricket watched. Practice outside alongside the famous Nursery ground. All of a sudden we were on. Ella tossed up and for the first time in the tournament we were batting first. We started badly as Abi fended off a high full toss first ball and was caught. Ella stood firm in the face of good Bexley bowling as wickets fell around her but it seemed our innings was over all too quickly. We had scored fast as we reached 58 in just 4.5 overs. Would that be enough? The girls looked despondent. They were going to have to produce a miracle to turn this one round. 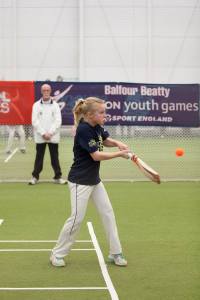 Parents, coaches, Councillors, the Mayor of Richmond and Dan our fantastic Sports Development Manager from Richmond Council watched on. I think I probably only need to copy his quote. “The bowling and fielding in the semi-final against Bexley in particular, was up there with one of the best sporting performances I’ve ever seen, at professional level as well!” He is not wrong. The girls were fantastic. They were sharp and threatening in the field. Emma stopping boundaries in the deep. A catch from Phoebe that can only be described as a worldly. How did that stick? Bowling so tight as Ella, Jess and Abi turned the screw and the pressure took its toll. In no time Bexley were staggering at 26-5. Only 1 wicket to take and she was a good bat. Phoebe bowled a tight over and then our youngest player, Imogen, came onto bowl. Dot, dot, dot and then the Bexley bat tries to play a shot. The ball lobs up. Imogen is under it. Disaster the ball goes down. Would that be our chance blown? Would little Imi be able to cope with missing such a crucial catch? Of course she would. How could I doubt her? Next ball was straight and true. A swing and a miss and the stumps went down. Incredibly the mighty BPG had taken Richmond to the final. 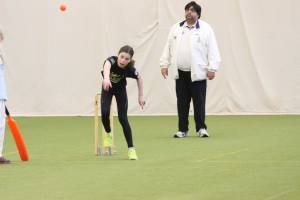 It was another long wait to the final. A chance to check out our finalists. Pictures in front of the famous ground and with the Mayor.  Our opponents were known. It was going to be Hammersmith and Fulham some of whom we knew. We needed 6 girls for the final out of 7, all of whom had played so well in the first two games. Who would want to be a manager to leave one out

A good start as we win the toss and put them in. Early bowling from Ella, Jess and Phoebe kept it very tight. H & F were under pressure. Abi then strikes with 2 wickets in an over. Then Imogen and Jess and another for Abi helped by more terrific fielding and 2 fantastic catches by Ella behind the wicket. 73 all out. Surely a gettable target. Preparation for batting was suddenly thrown though. All the bats had disappeared out the bag. One was found and some were loaned from our ever growing band of supporters which included current Middlesex 1st XI players.

Ella and Abi finally made it to the middle and got us off to a good start. Over 20 were on the board in just the 2nd over before enthusiasm for stealing runs went a little far and Abi was run out. Next ball Ella smashed the ball into the ground and it cannoned off the floor into the hands of the H&F fielder. Hope and luck was all H&F could have and they got it in plenty as they claimed the catch and the umpire concurred. 2 wickets in two balls and suddenly it was a different game. Jess and Phoebe added a few until nerves got to the girls and another suicide run out. Phoebe was gone. No need to panic. We were still well head of the run rate required. Jess batted patiently until the ball lobbed off her foot into the hands of their wicket keeper. A half-hearted appeal for a catch. The same umpire. The same result. Maybe it was time to offer him my spare glasses from my bag. However as someone once said “The eyes are useless when the mind is blind” so not sure it would have helped

Imogen and Sadie eked out some runs but H&F seemed to have 7 players and finally they claimed the wickets and Richmond were beaten. A few tears were shed but the girls can only be proud of what was a magnificent performance and far exceeded all expectations. The fielding and bowling in particular was fantastic and was demonstrated by the fact that they bowled every side out in the competition. I can only say I was immensely proud of them. Spirits picked up as we wound our way home. Amelie got her promised medal, we have tea with the Mayor to look forward to and we can plan to go one better next year. A big well done to Ella, Emma, Phoebe, Sadie, Jess, Abi, Imogen and of course Amelie. And special thanks to Dave and Hannah, Natalie for scoring, all our supporters and Dan from Richmond Sports Development.